READ AND CONTRIBUTE TO 'If You Love Stratford' FOR INFORMATION, NEWS, VIEWS AND IDEAS

This 'gift' of money to Stratford's downtown from this immoral corporation is a cynical move calculated to lull citizens into forgiving their previous bullying tactics towards our city. It is a bribe in reality. This bribe money is the amount that walmart should have paid to the city to cover the legal fees that the city was forced to pay to defend our municipal rights and Official Plan in a nasty and lengthy OMB hearing. I was stunned by the decision made by OMB chairman Colin Heffernan requiring Stratford to cover the legal fees when the city was forced to this fight by walmart. I lost all respect as this was not a decision that supported the autonomous development of Stratford.

This walmart bribe is calculated to insure citizens shop in their store and is still a grave danger to the health of our downtown. We need a real downtown, a functioning downtown with businesses that citizens need in their daily lives and that people in the area can walk or bike to do their errands.

The big box being built in the east end will create more sprawl in an area of the city already marred by too much car based commercial. The urban planners who advised the city on these matters created OPA10 in the official plan to promote balanced growth between the east and west giving our downtown the central location and a better chance to keep healthy and strong. Walmart has thumbed their nose at this balanced municipal plan and bulldozed their way into the east. If walmart can spend so much on this bribe - they must be counting on sucking a whole lot of money out of Stratford. This money does not support the local economy but is channeled right to the vast coffers of this corporation.

I worry so much about our downtown, I have seen the number and types of business change over the years. An attractive, flexible people place behind city hall is certainly a much anticipated improvement to our heart, our core. However, we must be vigilant. We do not need a disneyland type theme park, we need a real downtown. We must support the downtown businesses. So called cheap prices have a very expensive hidden cost. Buy Local / Buy Loyal / Buy Little Box. 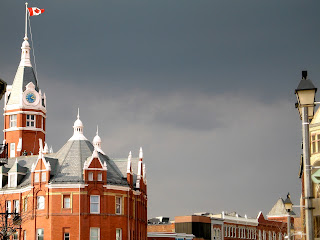 Help to make changes at walmart that help the workers.
http://forrespect.org/wp-content/uploads/2011/10/OUR-Walmart-Town-Hall-110311.pdf
Posted by Lesley at 3:17 PM No comments:

Please note that councilor Frank Mark was the only one not to support the interim control by-law that would help protect Stratford.

Wal-Mart, it appears, has not given up on its idea of locating a department store in Stratford's east end commercial area.

In a startling revelation to city council last night, planning consultant Warren Sorensen informed council that CRAFT Development Corp. representatives have advised they are working with Wal-Mart and that the retailer "wants them to proceed with plans and building as they have submitted."

The city's planning consultant said that although no large commercial owner has been formally identified for a proposed 89,000 square foot building at Ontario St. and C.H. Meier Blvd., "Wal-Mart Project, Stratford, 892-920 Ontario Street" appears in the title block on landscape drawings submitted as part of a site plan application.
"The impression conveyed is that Wal-Mart is interested in locating on the site," said Sorensen in a written report to council that he presented in person.

"That would constitute a significant departure from the intent of the city policies so recently endorsed by the OMB (Ontario Municipal Board)," Sorensen said.

Following discussions that included a closed-door meeting with city solicitor Jose Matera, council accepted Sorensen's advice to bring in an interim control bylaw to prohibit use of a commercially zoned strip of land along the north side of Ontario Street for a department store.

As well, council accepted advice that a planning study be undertaken that would "at a minimum" examine all the lands along Ontario St. East between Romeo St. and the city limits that are designated commercial or zoned highway commercial.

The control bylaw, that would be in effect for up to a year, would ensure that the planning study can be carried out before any development occurs that would prejudice the results of the study or prejudice the achievement of the city's commercial structure policies, explained Sorensen.

Responding to a question from Coun. Dave Gaffney, Matera told council the proposed interim control bylaw could be appealed to the OMB by property owners and she expected there might be some appeals.

Lands proposed for inclusion in the study area extend from the east city limits to Romeo St. and are mostly, but not exclusively, on the north side of Ontario St. The proposed study area does not include industrial lands.

In his report Sorensen points out that the prospect of building demolition and redevelopment can increase the potential for developing significant retail facilities within developed areas of the Ontario St. East commercial corridor and there are other locations where that could also occur and "unanticipated retail developments" could come forward.

But he advised the development proposal for the northwest corner of Ontario and C.H. Meier would prejudice the city's ability to achieve its long range commercial plans - plans supported by the OMB in its decision earlier this year.

Only Coun. Frank Mark voted against following the planner's advice.

This latest action by the disrespectful mega sprawl company Walmart ignores the accepted recommendations of Ontario Municipal Board Chairman Colin Hefferon regarding the best commercial structure for Stratford. It also flies against the passion of Stratford's citizens to protect the character of our community. Again our local planning rights are under attack.

I think this quote is very appropriate:"In a time when urban sprawl and suburban big box stores have left our formerly vibrant downtowns struggling to hold on to some vestige of retail business, Stratford stands alone as a beacon of hope. There is no model for a Wal-Mart that could accurately reflect the artistry and creativity that define downtown Stratford and its population. Don't even try to define it.

Please come back when I have a new petition to protect Stratford from mega sprawl in our east end.
Posted by Lesley at 10:47 AM No comments:

IF YOU LOVE STRATFORD: Two Cents Worth

sign the petition to increase garment workers salary at
http://wakeupwalmart.com
Posted by Lesley at 6:29 PM No comments: 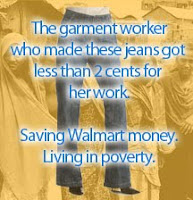 Please join Wake Up Walmart and the National Labor Committee in calling on Walmart to support a 35 cent per hour minimum wage for garment workers in Bangladesh.

Last week we posted on our blog about how Walmart's $8 pairs of jeans were made by Bengali garment workers, mostly young women, who are paid the equivalent of 11.5 cents an hour. This week these workers took to the streets in protest over wages, where at least 25 workers were injured by authorities.

Please join us in calling on Rajan Kamalanathan, Walmart's Vice President of "Ethical" Sourcing, to support protesting workers in Bangladesh in calling for a garment worker minimum wage of 35 cents an hour.

Walmart’s claim that it sources its products in an ethical manner is completely undermined when workers are forced to take to the streets in protest over wages so low they have been called “not only insufficient, but also inhumane” by the Prime Minister of Bangladesh.

Posted by Lesley at 6:11 PM No comments:

Walmart disrespects our plan for balanced growth and is building in the east end of the city by taking advantage of a planning loop hole. The East end will become increasingly sprawled.
History:
The citizens of Stratford overwhelmingly supported Official Plan Amendment 10 (OPA 10) which re-directs future commercial growth that can't be accommodated in the downtown core to the west end of the city where future residential growth will develop on the annexed lands. The Stratford City Council passed and approved version of OPA 10 which was appealed by Avonwood to the Ontario Municipal Board.
Stratford won the OMB appeal and OPA10 became official. The OMB decided against Stratford by making the city and not Walmart who forced the appeal, responsible for the city's legal fees.
Local wisdom should be the prime authority; it should be respected and enacted.
Be wise...
Buy Local
Buy Loyal
Buy Little Box
Support Stratford's Downtown Merchants

What is at stake is the health and vitality of the heart of Stratford, our downtown core.